How to calculate Late Fees and Interest on GST (Proven Method) 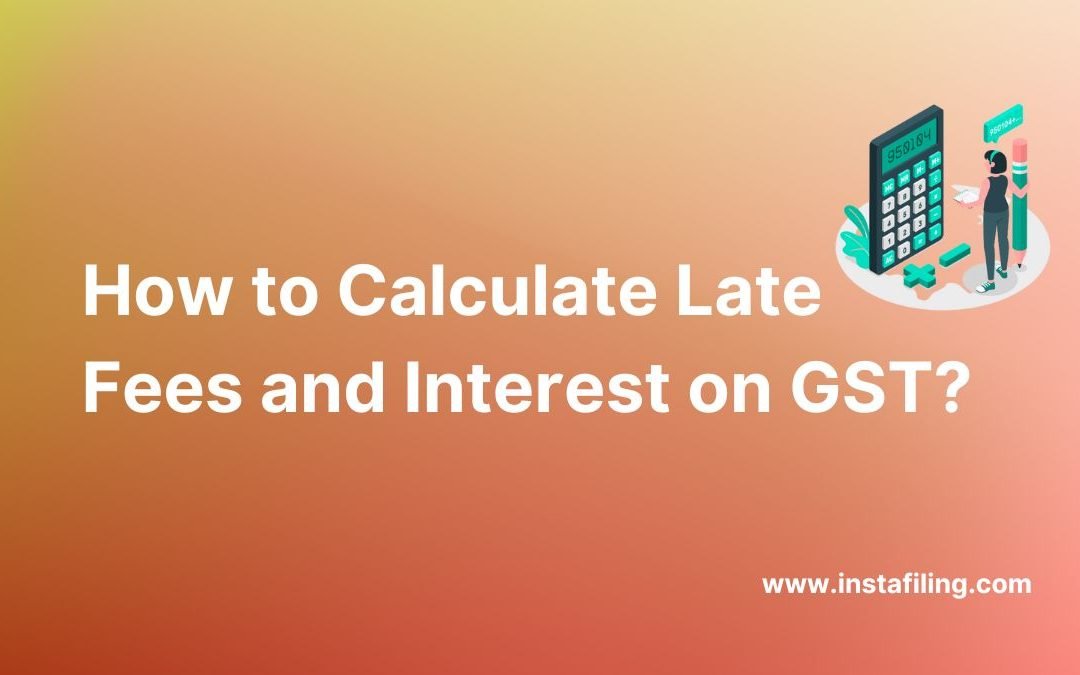 A late fee is an amount charged for filing GST Returns after the deadline, as per GST Law.

When a GST Registered business exceeds the deadlines for filing GST Returns, a minimum late fee will be charged for each day of the delay.

The amount of the late fee is determined according to the number of days that passed from the due date.

If you found it difficult to calculate late fees and interest on GST, then this article is for you.

Let’s deep dive into the topic of  “How to calculate Late Fees and Interest on GST”.

What is the late fee for GSTR 3B?

As per Section 47 of the CGST Act, late fees are a daily penalty levied for filing GST returns late. Only cash is allowed for payment of the late fee. Taxpayers are unable to use the Input Tax Credit, or ITC, which is available in the electronic credit ledger, as a method of paying for GST late fees.

Even though there are no sales or purchases and no GST liabilities to disclose in the GSTR-3B, the late fee is still charged if nil returns are filed late.

Late fees for GSTR-3B can be paid in the subsequent month. You cannot file the current month’s return before paying the previous month’s late fees.

How is the GST late fee calculated?

According to the GST Acts, the late fee under both the CGST and SGST Acts must be paid for intrastate supplies in the following way:

From the June 2021 return period onward, the maximum late fee was reduced, as stated in the previous section.

Late Fees for GSTR-9 and GSTR-9A

The late fee for GSTR-9 and GSTR-9A is as follows:

A maximum late fee of 0.25 percent of the financial year’s turnover is being imposed by law.

The late fee for GSTR-10 is as follows:

How do you calculate late payment interest?

After deducting input tax credit claims, or ITCs, interest is imposed on the late fee of GST liability. The taxpayers who are eligible to pay the interest on late fees of GST are those who:

If you fail to pay the GST according to the deadlines for filing the return, you can calculate late payment interest at the following interest rates:

What happens if a payment is not made in 180 days under GST?

The ITC will be reversed and will be charged together with interest if that payment is not made within 180 days as per GST.

What is the late fee for the GST annual return?

How do I avoid late fees on GST?

FAQs: How to calculate Late Fees and Interest on GST

1. What if GST returns are not filed for 2 years?

As per GST law, there will be late fees for each day that you fail to file the GST returns that are required. In addition, the interest is charged at a rate of 18% annually on any unpaid taxes, if any.

2. Can we pay the GST penalty in installments?

Yes, as per Section 80 of the CGST Act, you can pay the GST penalty in installments.

3. What is the highest late fee allowed by law?

A maximum late fee of Rs 10,000 has been imposed under legislation until May 2021. According to this, the Government may levy no more than Rs 5000 for each return filed in accordance with each Act.

4. What happens if an invoice is late?

If an invoice is late, you have the right to impose late fees on unpaid invoices.

We hope this article will help you better understand “how to calculate late fees and interest on GST.”

If you have any other queries, do let us know in the comments section below, and feel free to reach out to our team.

Documents required for GST registration of a company – InstaFiling