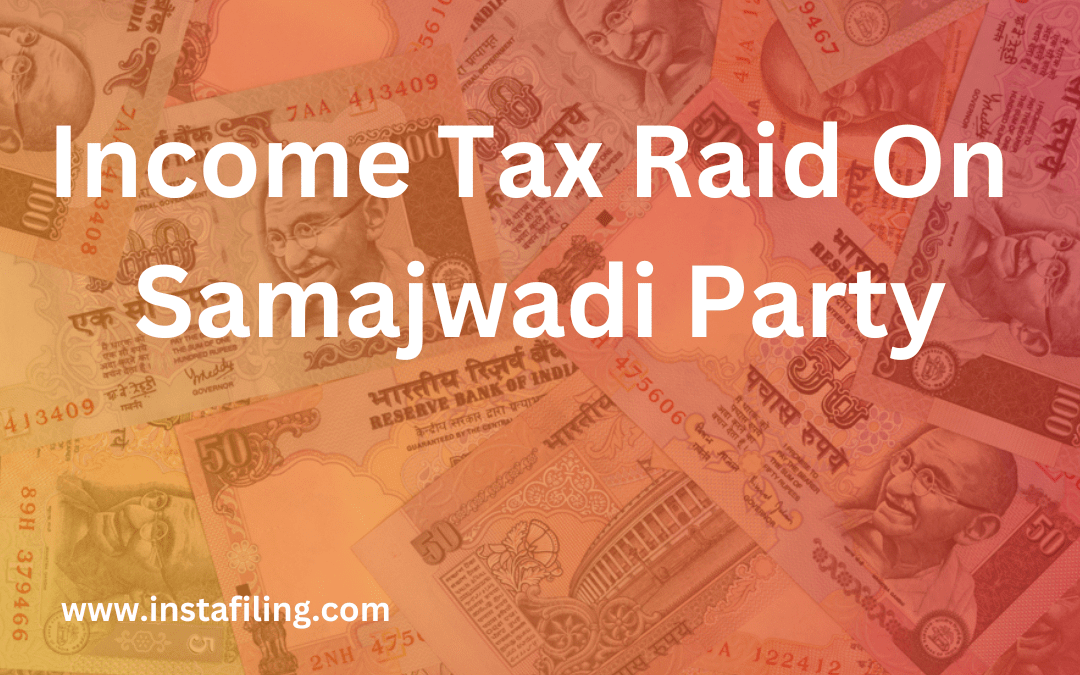 The Samajwadi Party is an Indian socialist political party with headquarters in New Delhi but primarily based in Uttar Pradesh. The Samajwadi Party, with a secular and democratic ideology, aspires to build a socialist society based on the principle of equality. This article is a guide to the income tax raid on Samajwadi party.

The Income Tax Authority raided Manoj Yadav, an Agra businessman, and leader of the Samajwadi Party. IT personnel raided Yadav’s apartment in the new Agra district.

Police confiscated cash and documents during Yadav’s raid. They searched the premises and seized several documents from Lucknow, Agra, Mainpuri, Mau, and Bangalore. The income tax raid elicited a sharp reaction from local Samajyadi party leaders. Income tax officials had to call the local police for their safety.

Senior SP leaders in Agra launched attacks against Prime Minister Narendra Modi and Uttar Pradesh Chief Minister Yogi Adhyanat over tax crackdowns. The leader of the Samajwadi party said Modi’s entire focus is on Uttar Pradesh as Modi is also a member of parliament from Varanasi in Uttar Pradesh. A team from the Income Tax Service also arrived in Lucknow and searched the home of OSD Jainendra Yadav of SP President Akhilesh Yadav and the home of Mau-based SP spokesman Rajivra Raj and obtained several documents.  SP spokesman Rajiv Rai said he has a house with only two rooms. He has no business in Uttar Pradesh and has no contract or lease.

During the SP government, Raj Corporation Limited (RCL) of Mainpuri district of Agra Division won a contract for the Tajganj project worth Rs 197 crore.

ASI opposed the Tajganj project, which was being worked on within 500 meters of the Taj Mahal. The then government of Uttar Pradesh asked the Supreme Court for permission. There was a commotion among the three Agra firm operators who worked on the Tajganj project together. RCL’s total share capital was approximately Rs.2 billion. The company’s annual turnover reached 500 crores. Manoj Yadav’s wife, Sarita Yadav, was also a company director and Block Pramukh of Ghiror, Mainpuri.

In this regard, Akhilesh Yadav said the BJP panicked over the growing influence of the SP in Uttar Pradesh. This was the reason for the raid against the SP leader.

A team from the IT department arrived at the company’s headquarters and executive residence in Jhansi. Searches were simultaneously in Lucknow and other locations including Kanpur. In Kanpur, the residence of Rajesh Yadav has close business ties with Ghanaram Constructions.

The IT team also searched residences and other buildings in the Jhansi-Kanpur area associated with contractors Rakesh Baghel and Virendra Rai. Both were closely related to Mr. Sham Thunder. Ghanaram Construction carried out a cash transaction of more than 100 crore rupees. Mr. Shyam Sundar was a legislator for 2 years and was influential in the Jhansi-Kanpur area.

The raid took place before the Uttar Pradesh legislative elections. Opposition parties accused the Bharatiya Janata Party of using the central authority to attack its leaders. Yadav said he expected the Central Investigation Service and Enforcement Service to pursue his party after the Income Tax Service, but said he would not be threatened. The cycle (symbol of the Samajwadi party) will not slow down,” Yadav told media representatives.

The IT department suspected that Rai evaded taxes. He is the owner of a group that operates educational institutions in Karnataka. The Samajwadi party leader claimed he had no black money or criminal record. He told the press he helped people, but the government didn’t like it.

An income tax raid has recovered Rs 150 crore from a businessman who was selling perfume for a Samajwadi party.

Tax evasion worth crores of rupees were in talks during the raid. IT raids were on perfume retailer Piyush Jain’s residence, factory, offices, refrigerators, and gas pumps in Kanpur, Kannauj, Mumbai, and Gujarat. He also launched Samajwadi party perfume as ‘Samajwadi Attar’. The raid was by officers of the Directorate General of GST Intelligence (DGGI) only after certain input of information.

Central Board of Indirect Taxes and Customs (CBIC) chairman Vivek Johri said about the seizure of cash of around 150 crore rupees in multiple raids in Kanpur linked to Trimurti fragrances. CBIC’s team searched the businessman Piyush Jain’s various buildings and counted the cash. The BJP leader attacked Akhilesh Yadav shortly after cash worth 150 crores was reportedly found during the raid.

The DGGI Ahemdabad team searched manufacturers and suppliers of pan masala. A freight forwarder and a fragrance company in Unnao were also searched because they were a fragrance supplier to Pan Masala Co. Mr. Johri also said one of his associates had received a tax evasion case for which he deposited Rs 3 crore but no arrests were made.

According to GST law, issue an invoice if the invoice exceeds certain limits. During the search, DGGI found items with a Goods and Services Tax (GST) rate of 28% plus cess, Johri said.

The investigation also revealed that these people sent materials without invoices or electronic bills of lading. This involves two or three parties. All the invoices were fake. Item values ​​were suppressed. A report of fake credit and fake invoices was made.

The Income Tax department conducted raids at 22 locations. Share your thoughts on the Income Tax Department’s ruling in the comments section.